Most markets are rallying since receiving a severe shakeout throughout the weekend, during which the price of Bitcoin (BTC) fell by $1,400 in minutes below the $11,000 level, liquidating $1 billion in futures along the way.

However, one of the most reliable coins in recent days has been Ripple’s XRP token as it rallied 40% in the past seven days and more than 70% from recent lows toward $0.30, as anticipated in the previous XRP technical analysis.

Now that the price target got hit, let’s take a look at the charts to see where the price of XRP may be headed next. 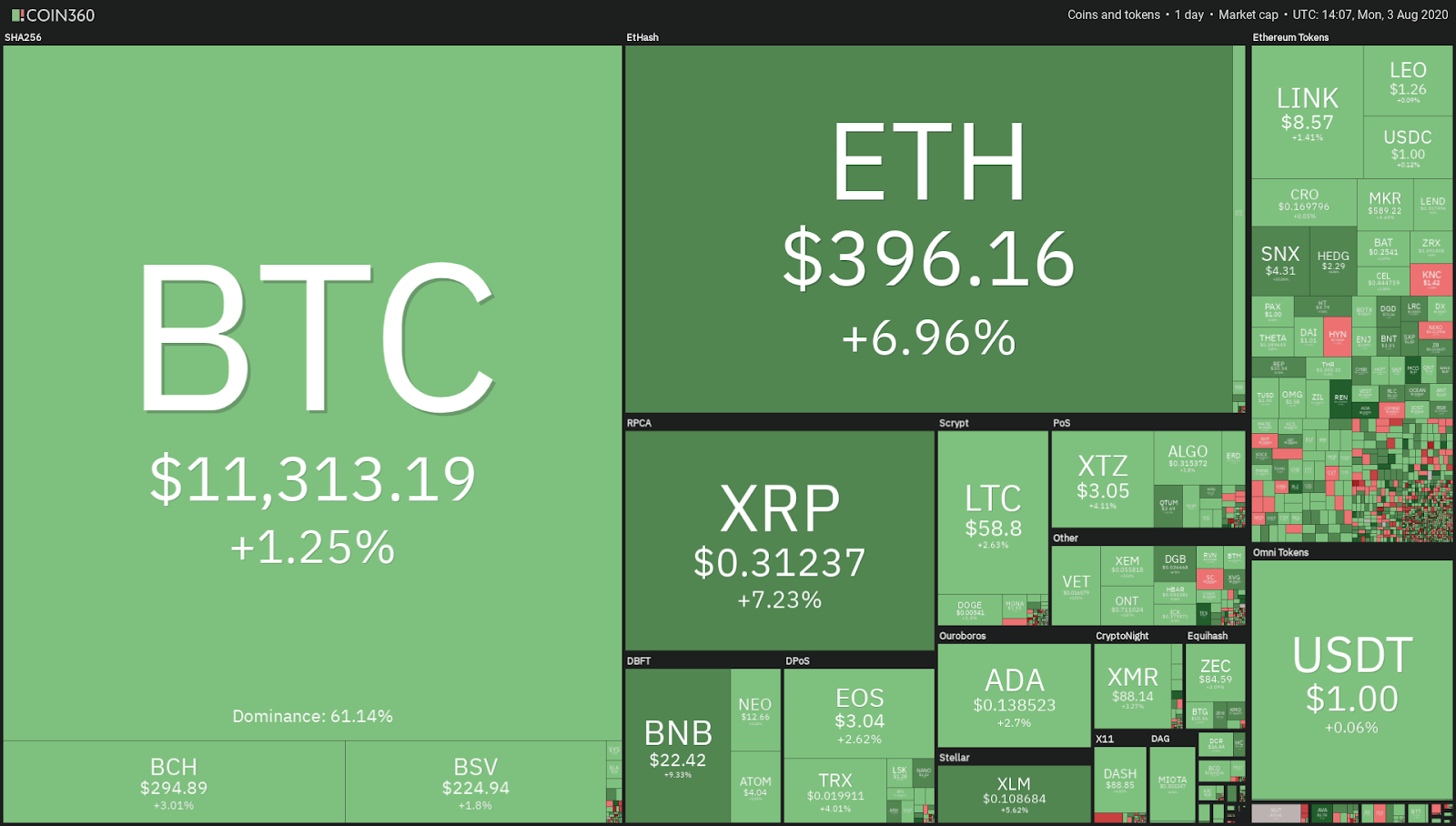 XRP rallies with more than 70% towards $0.30 crucial resistance

The price of XRP did a support/resistance flip at the $0.185 on July 19, after which an apparent breakthrough of the 100-day and 200-day moving averages (MAs) occurred. This breakthrough resulted in a massive rally towards the $0.30 zone, a surge of more than 70%. 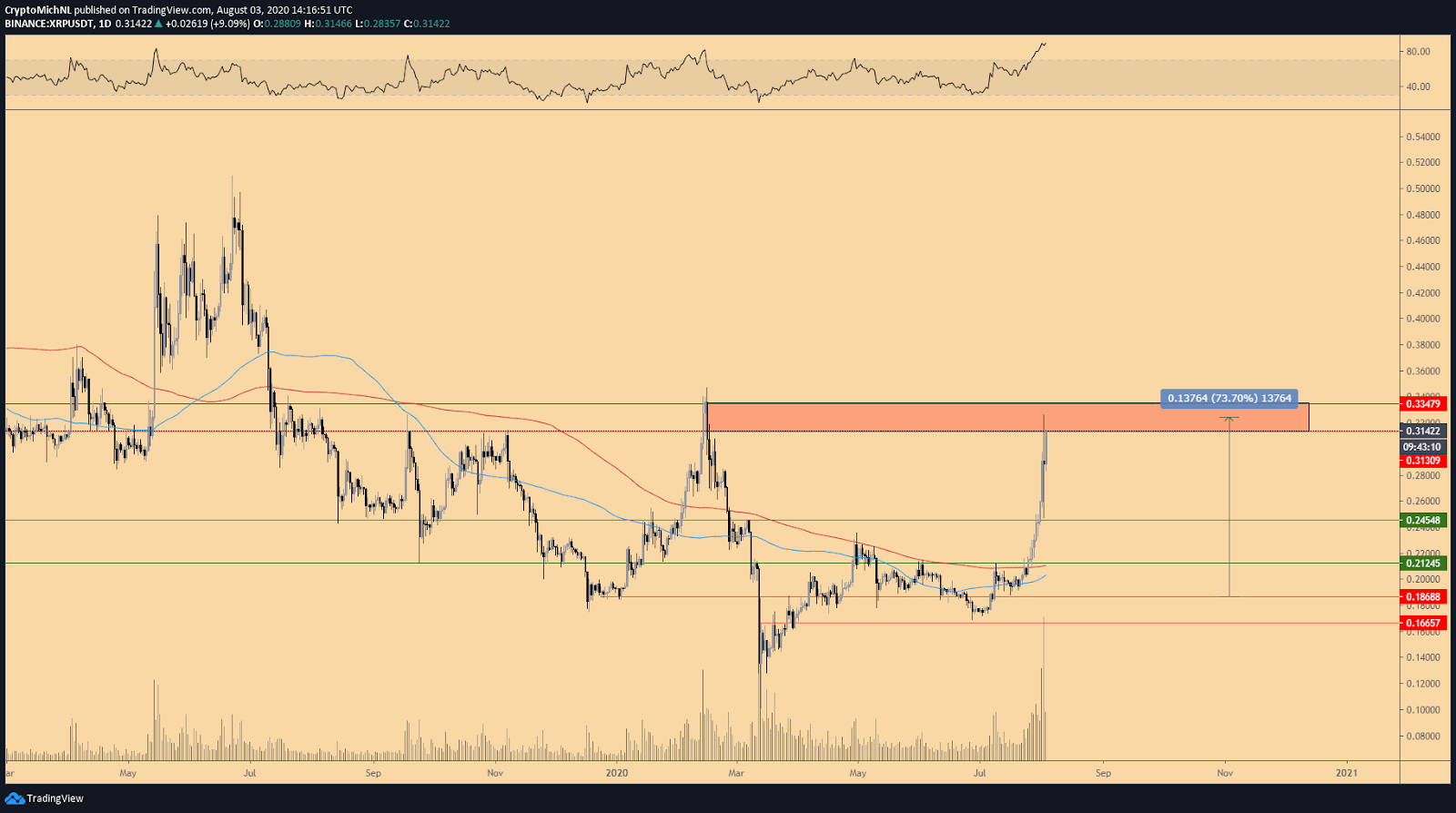 Given the chart, further continuation is very unlikely for XRP next in the near term. The $0.30 area is a vital resistance zone, which likely doesn’t break in one-go, particularly after the price of XRP already saw a massive rally.

Breaking through the 100-day and 200-day MAs puts XRP/USD in bull territory and dips should be considered as buying opportunities.

The next resistance zones after this crucial $0.30 area are found between $0.46-0.50. Likewise, the next rally for XRP will likely pause at these levels. 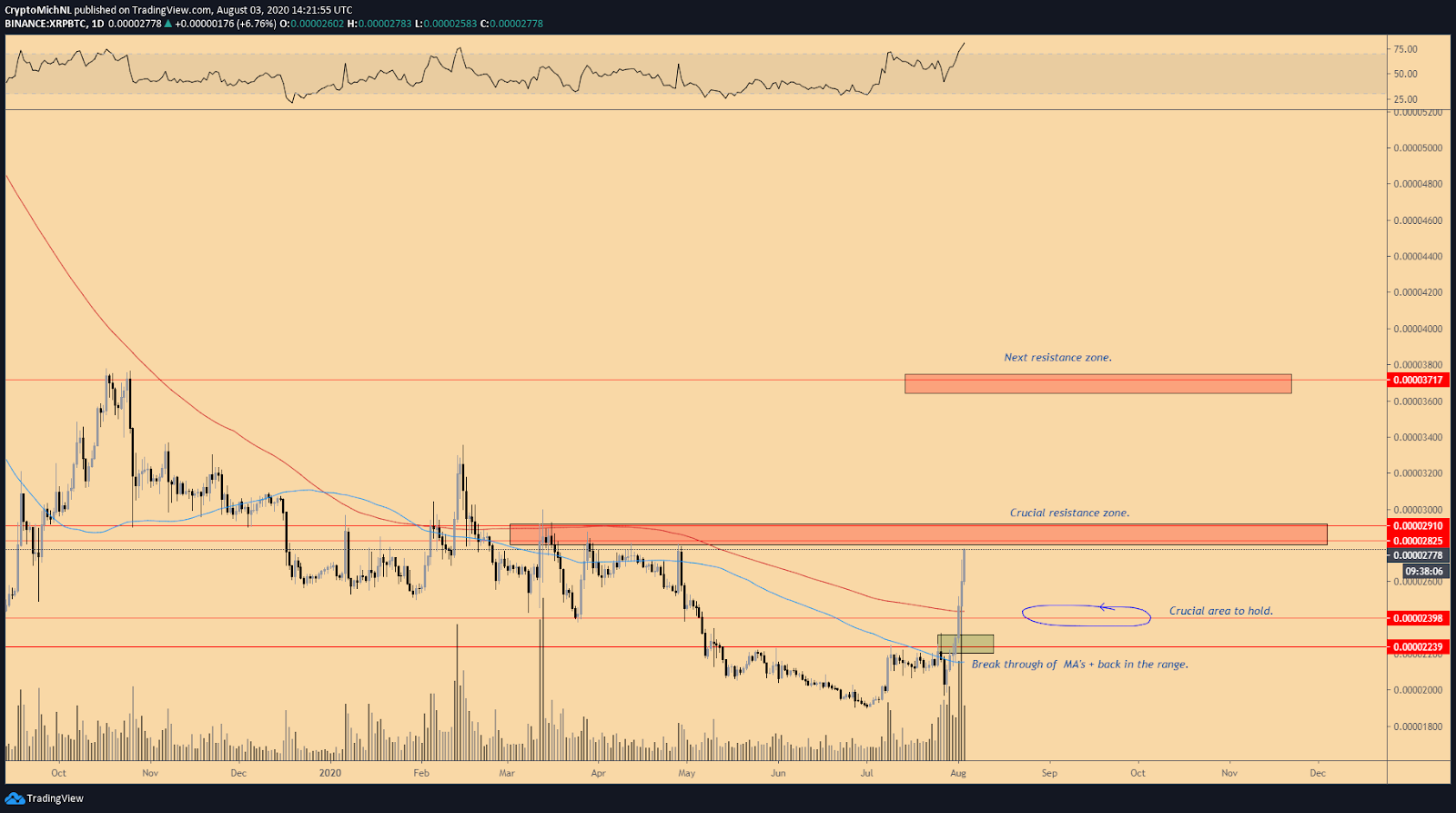 The BTC pair of XRP has been trending down for more than two years and even lost the crucial support level at 0.00002400 sats.

However, in the recent price action, XRP broke through this level and rallied towards the next resistance zone at 0.00002800 sats. Thus, the same conclusion can be drawn from the BTC pair as on the USDT pair. In other words, it’s unlikely to expect upward continuation for the BTC pair as well. A rejection seems very likely to occur as the price has rallied to this resistance level in one vertical line.

The crucial levels to hold are the 100-day and 200-day MAs, which XRP broke through and must now flip into support. This also lines up with the crucial support level at 0.00002400 sats.

What are the scenarios for XRP/BTC?

The most likely scenario would be a correction towards the 0.00002400 sats area. 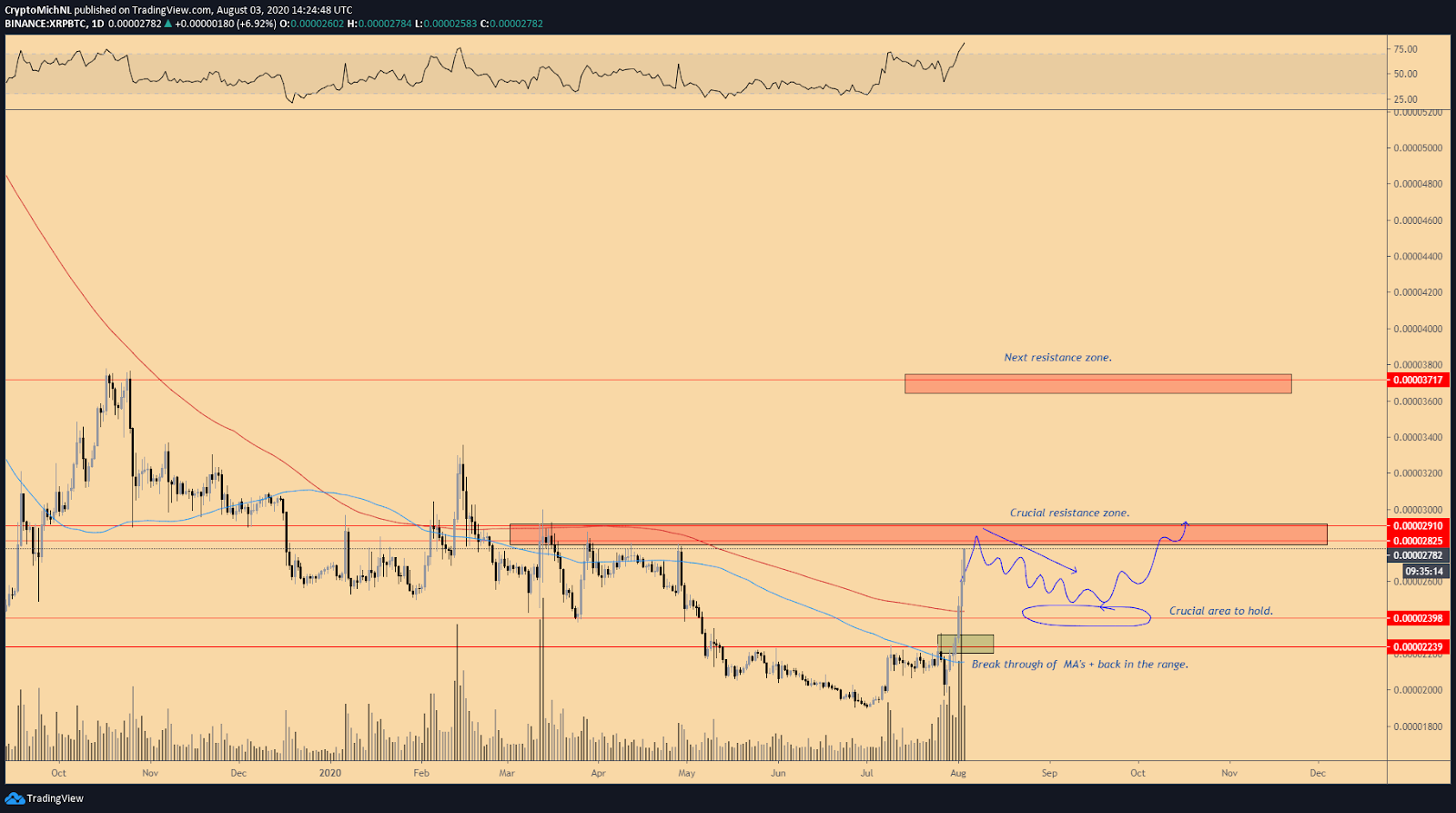 Such a correction would line up with an overall correction of the crypto markets and be classified as healthy.

The next leg up would most likely bring the price of XRP towards 0.00003700 sats. The second scenario would be an immediate breakthrough through the 0.00002800 sats resistance zone. 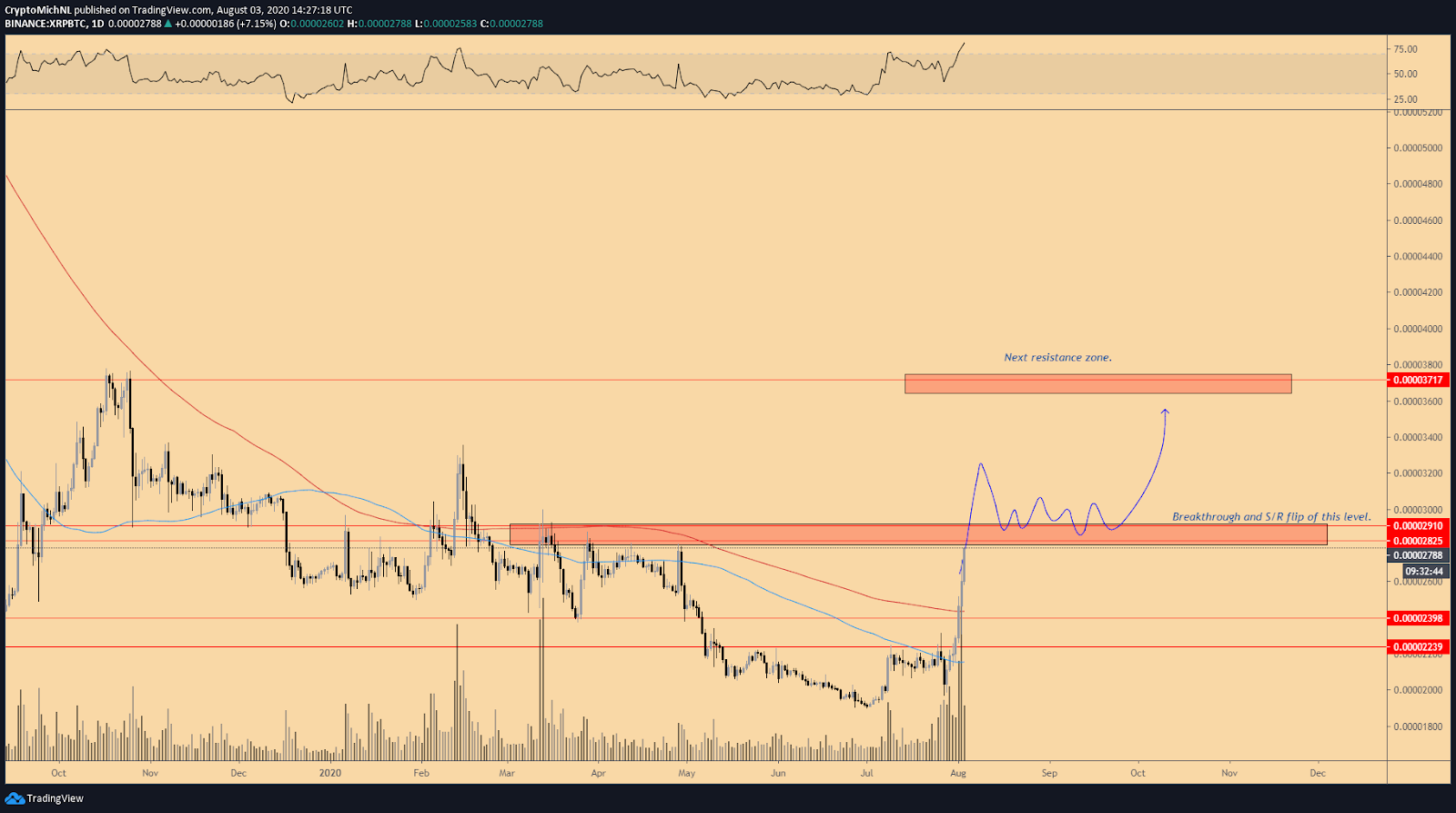 Such a scenario is less likely as the price of XRP rallied towards this resistance in one-go, which usually ends up with a severe rejection.

However, if a breakthrough does occur, the support/resistance flip of the 0.00002800 sats level would likely push XRP price up toward the next resistance zone at 0.00003700 sats.