Bitcoin has finally woken from its two-month slumber, as well as interest in the number-one cryptocurrency along with it. Bitcoin futures trading is bustling again, with both volume and aggregated interest at their highest since the March market crash. So, with all the action going on in Bitcoin (BTC), does this mean that the altcoin season is coming to an end? Maybe not.

During a long period of inaction in Bitcoin, which saw traders growing bored and spot and derivatives trading on the decline, there was plenty of action going on in altcoins. Decentralized finance, in particular, is an area that has shown astonishing growth in 2020. In February, DeFi hit an important milestone by surpassing $1 billion in total locked value in its protocols. Today, despite the savage market conditions particularly in the first quarter, that figure has almost quadrupled. Total locked value in DeFi now stands at over $3.8 billion.

DeFi tokens haven’t been the only ones seeing major price surges either, although they led the charge. Popular altcoin Dogecoin (DOGE) also saw massive gains on the back of the infamous viral TikTok video, and projects like Filecoin and Polkadot also caused a stir (and parabolic gains). All this happened while Bitcoin was languishing in the $9,000-$10,000 range, which resembled a stablecoin at times. The alt season had begun in earnest… but is it about to stop?

Bitcoin made its biggest move this year when it pierced the resistance level of $10,500 and briefly shot past $11,400 on Monday. This was indeed accompanied by a price correction in most major altcoins, including some of the high-performance DeFi tokens like LINK, Maker (MKR), Compound Coin (COMP) and Aave (LEND) at the beginning of this week.

The temporary retractions, as BTC made an epic breakout, seemed to suggest that traders may have been taking the gains made in these alts and placing them into Bitcoin and Ether (ETH). Let’s not forget, after all, that Ether, despite stalling a little in the last couple of days, has still posted gains of more than 40% this month.

On Thursday, however, as BTC hovered around the $11,000 mark, indecisive of which way it wants to go next, many of the DeFi tokens made up for lost ground. Notably, Aave and Synthetix Network Token (SNX) registered 24-hour gains of 18.8% and 6.5%, respectively. 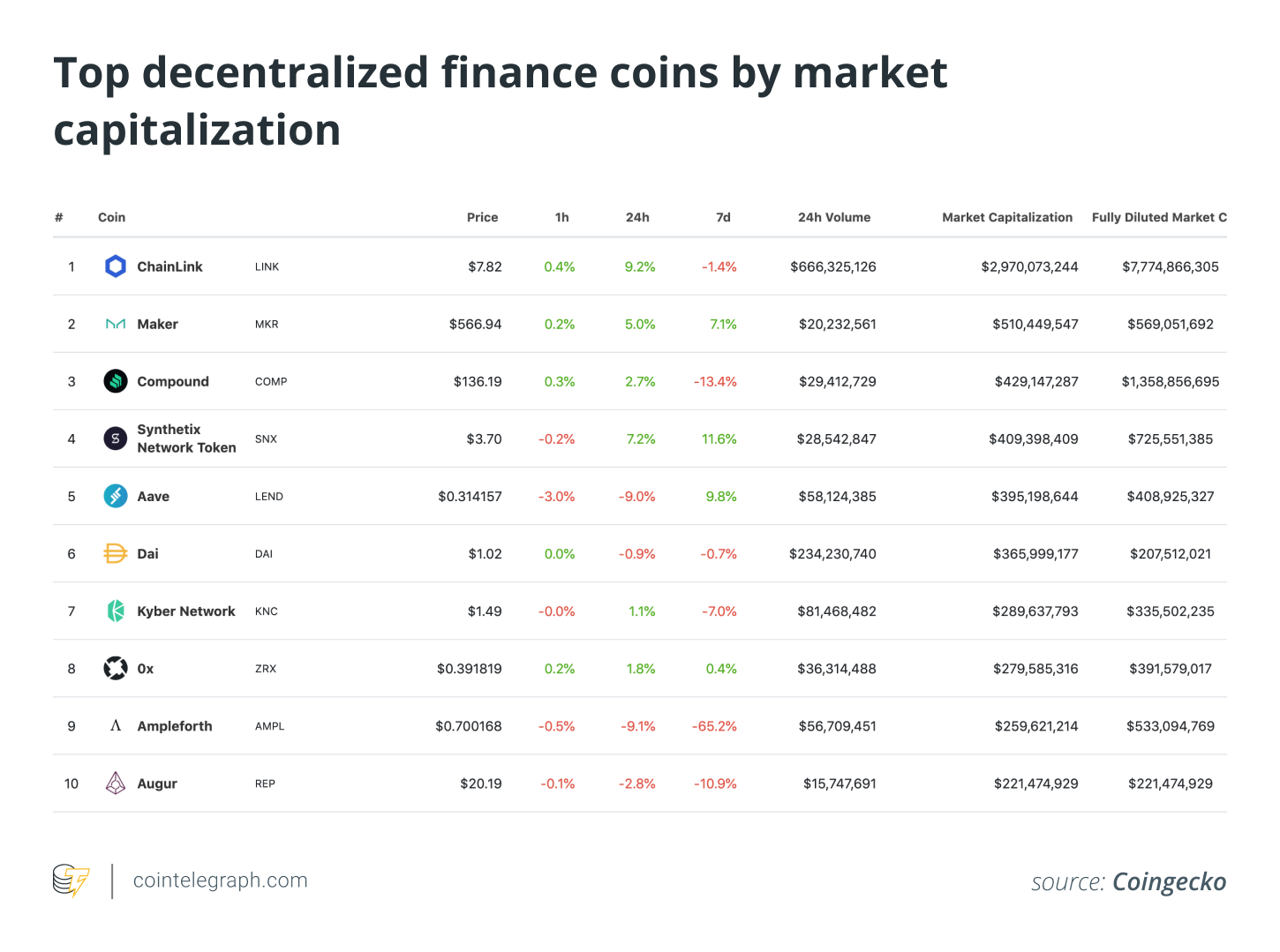 The end of the altcoin season? Not so fast

While we can perhaps conclude that the altcoin season may have temporarily pressed pause while Bitcoin stole the limelight, let’s remember that most altcoins follow Bitcoin’s pattern and rise in price shortly after as well. BTC’s gains are good for altcoins, and the buzz surrounding DeFi cannot be ignored. Just as we’re seeing more and more locked value every day, we are also seeing major institutional investment in the DeFi space.

Giant players like TD Ameritrade, CMT Digital and Arca Labs have all been investing in DeFi’s development and calling for regulatory clarification. We’ve even seen the United States Securities and Exchange Commission approve an Ethereum-based fund by Arca Labs earlier this month. Bitcoin’s dominance may still remain high at 61.4%, but the promise of DeFi, the expectations surrounding Ethereum 2.0 and its major gains this year all show more promise for alts.

Moreover, with U.S. banks now being allowed to custody Bitcoin, a nod from the SEC at Ethereum, and no investor able to ignore the potential of DeFi, the signs look bullish for the space in general. And unlike the wild bull run of 2017, this time around, the industry is infinitely better prepared. The run won’t be simply retail-driven or fueled by fear of missing out, and the high-quality projects leading the charge have shown real progress and promise, as well as real products to back up their white papers.

The views, thoughts and opinions expressed here are the author’s alone and do not necessarily reflect or represent the views and opinions of Cointelegraph.

Jay Hao is a tech veteran and seasoned industry leader. Prior to OKEx, he focused on blockchain-driven applications for live video streaming and mobile gaming. Before tapping into the blockchain industry, he already had 21 years of solid experience in the semiconductor industry. He is also a recognized leader with successful experiences in product management. As the CEO of OKEx and a firm believer in blockchain technology, Jay foresees that the technology will eliminate transaction barriers, elevate efficiency and eventually make a substantial impact on the global economy.