Bitcoin is surging higher after consolidating under $10,000 for a number of weeks and months. As of this article’s writing, the leading cryptocurrency is trading at $11,000 — a price nearly 20% higher than it was seven days ago.

The asset is on track to hit $20,000 by year-end, according to a prominent cryptocurrency investor and Wall Street veteran.

He also said that he thinks gold will continue to rise, citing the “liquidity pump” being activated by governments and central banks the world over:

“Great bubbles usually end with policy moves. It doesn’t look like the Fed is going to raise rates … The liquidity story isn’t going to go away. We’re going to get a big stimulus.”

This comment comes as U.S. politicians are working on the next $1 trillion (plus) stimulus bill for the millions of unemployed, underemployed, and underperforming Americans.

Novogratz, a former Goldman Sachs partner, added in that interview that he thinks this money printing and other trends are pushing focus from stocks back to Bitcoin and gold:

“A lot of that retail interest shifted to the story stocks, to the tech stocks, because they were just more fun … Yesterday you saw a lot of money shift back over to gold and bitcoin. There’s an adoption game in bitcoin that you don’t have in gold. But I like them both.”

Options Market Isn’t All Too Sure

The data below is from Skew.com, a crypto derivatives tracker. It suggests that the crypto market believes there is a 4% chance Bitcoin hits $20,000 by the end of this year. 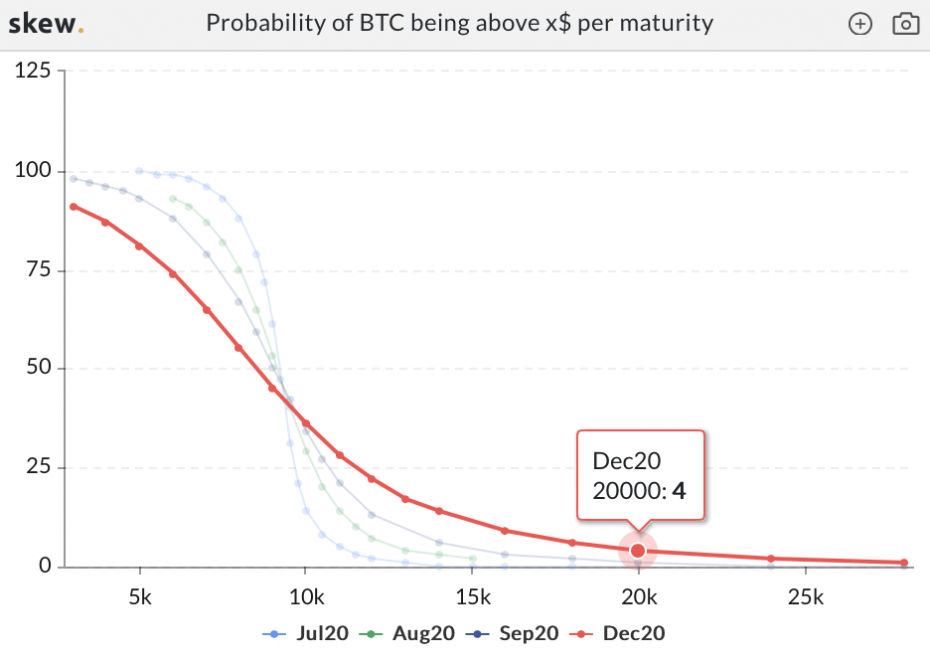 This comes in spite of the growing support for Bitcoin to hit that level by year-end. Commentators like Dan Morehead of Pantera Capital, BitMEX’s Arthur Hayes, and Mike McGlone of Bloomberg Intelligence have all said in recent months that BTC hitting $20,000 by the end of the year is probable.