The dollar has been in sharp decline. Analysts are calling for the global reserve to lose its crown to the likes of Bitcoin or the yuan. Sentiment has reached substantial lows.

However, when dollar sentiment fell this low in the past, it often triggered a strong reversal in the currency. Such a reversal, if it happens again, could bring a day of reckoning to crypto assets.

All markets are priced in USD due to the United States dollar’s role as the global reserve currency. It is the base pair currency that all exchange rates are based on, and the most dominant currency in terms of overall trading volume. Its power is unprecedented, but fading as of late due to the pandemic, political tensions, and unrest across the country.

Analyst shave been calling for as much as a 35% decline in the dollar currency index against other major national currencies. These assets include the yuan, euro, gold, and even Bitcoin.

Sentiment thus far due to stimulus money pumping into the market, has been correct: the dollar is drowning by its own printer. But negative sentiment may have outpaced the drop itself, prompting the metric to reach a low that in the past has caused a large reversal. 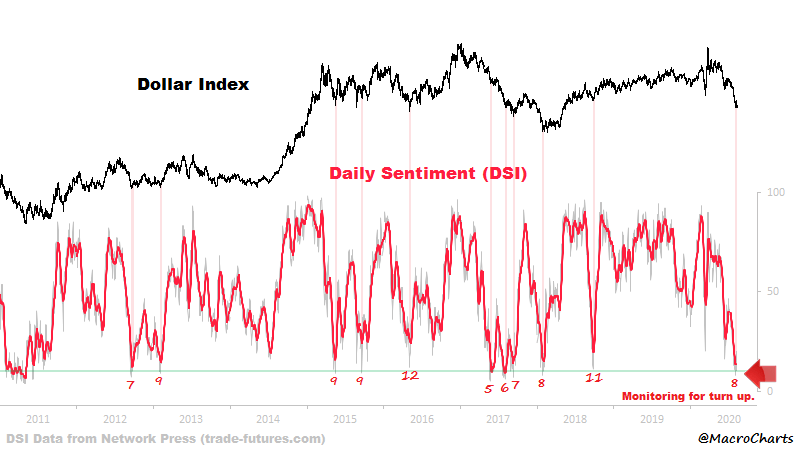 The dollar’s weakness has allowed gold to reach a new all-time high, competing currencies to get a leg up, and Bitcoin to break $10,000. But what happens when the dollar rebounds?

Bitcoin has been tracing almost 1:1 against an inverse DXY dollar currency index chart. The correlation is uncanny, showing the substantial impact the dollar’s weakness directly has on Bitcoin’s strength.

Gold shows a similar correlation albeit not as pronounced. Other altcoins like Ethereum rose even more sharply against USD.

But the correlation also shows the two asset’s charts beginning to reverse after a powerful move in one direction. As the saying goes, what goes up, must come down. And as the dollar reverses, Bitcoin and the rest of cryptocurrencies could come crashing down by the dangerous blow dealt by USD.

With more stimulus checks going out, and results of the last stimulus package’s impact on the dollar showing through investment ROI, the dollar is due for more decline in the days ahead.

Inflation takes time and will play out over years, not weeks or months. Due to this, any reversal in the dollar will be short-lived, and precious metals, gold and silver, and cryptocurrencies like Bitcoin, will continue to grow in the years ahead.