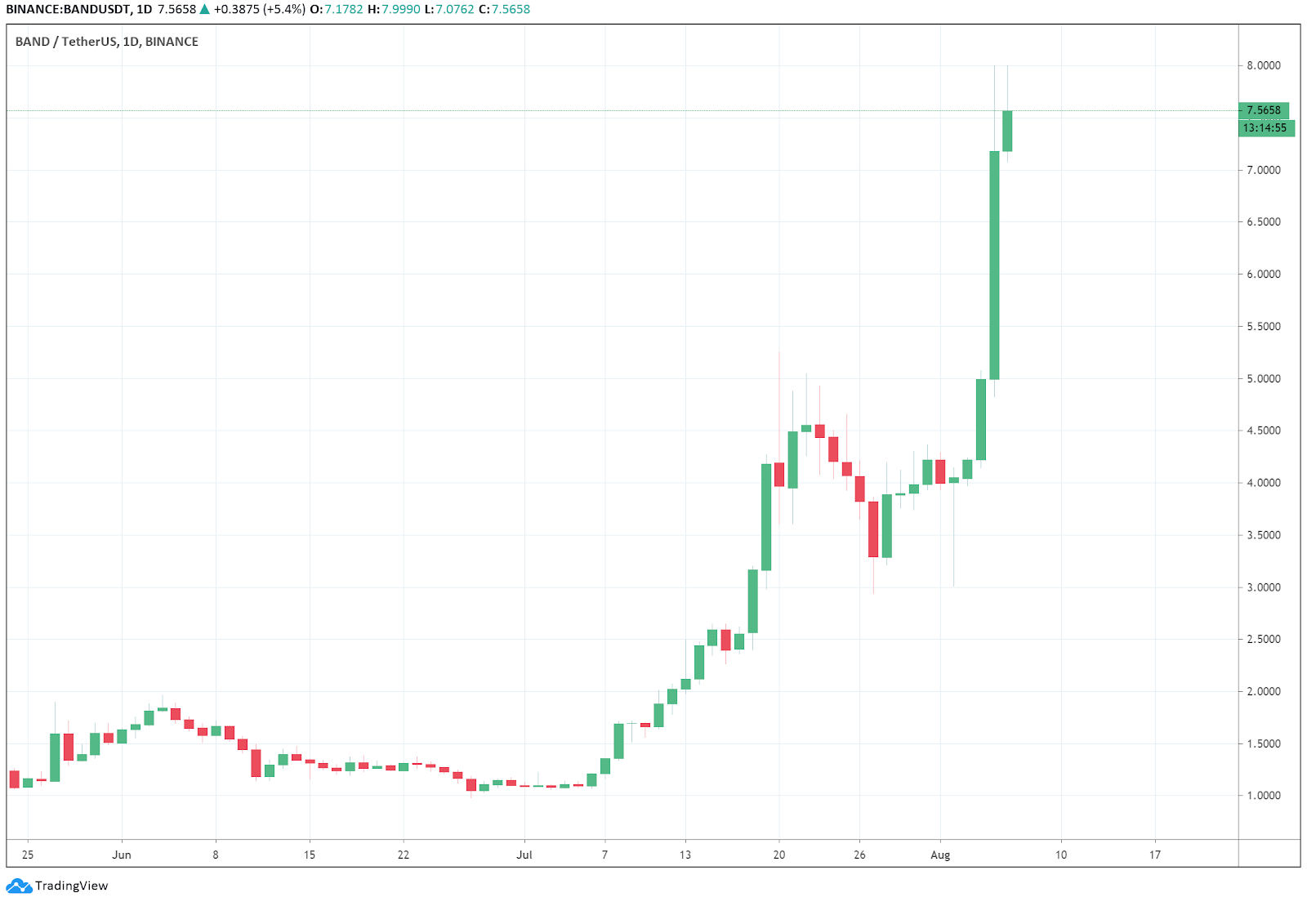 Since June 1, the total value locked in DeFi protocols increased from $1.04 billion to $4.47 billion. The valuations of DeFi-related project tokens has risen substantially as the capital involved in the DeFi space surged by more than four-fold.

Band Protocol, like Chainlink, is a blockchain network for oracles. DeFi protocols rely on oracles to retrieve market data, as they cannot access raw data from other blockchains or websites. As such, oracles are critical to the success of DeFi applications.

As the DeFi market is rapidly expanding, the demand for oracles is also increasing in tandem. DeFi projects technically could make their own oracles but it requires time and resources to develop them. That is where oracles like Band Protocol and Chainlink come in.

On Aug. 5, Zach Segal, the head of listings at Coinbase, said Coinbase Pro would list Band Protocol. The official Coinbase Pro account said it would list BAND by August 10, as long as liquidity conditions are met. The Coinbase Pro team said:

Within one hour, the price of BAND surged from $5.6 to $8, after the Coinbase Pro listing was announced. Many cryptocurrencies have seen strong rallies in the run up to Coinbase listings. But after the listing, as seen in the case of Compound (COMP), they tend to see take-profit pullbacks.

On Aug. 4, Band Protocol and Elrond announced a partnership to use Band’s oracles to fetch off-chain data feeds. At the time, Elrond CEO Beniamin Mincu said:

“Cross-chain data availability will accelerate DeFi applications being built on Elrond, while off-chain data will open the door for a multitude of potent business applications.”

According to CoinMarketCap, Elrond has a market capitalization of $278 million and is the 43rd cryptocurrency by market cap. Backed by Binance Labs, it is a proof-of-stake (PoS) blockchain network built for large-scale decentralized applications (DApps).

Based on the recent trend of BAND, early investors have expressed optimism towards the project. Kelvin Koh, the co-founder of Asia-based venture capital firm Spartan Black, said:

“Congrats to the BAND team. Well deserved recognition for a team that works super hard and has proven that it can go against the odds. I expect more partnerships and exchange listings to come on the back of this.”

Michael van de Poppe, a full-time trader at the Amsterdam Stock Exchange, pointed out that tokens launched from the Binance Launchpad has generally performed well. He said:

“We’ve seen some amazing runs on the IEO’s of Binance. Strongest movers are; KAVA, ERD and BAND as they all pulled a move of more than 10x. Recently, $PERL also joined the party with a big breakout. I think CELR, ONE and BRD can still join.”

Whether the strong momentum of BAND could offset the threat of a post-Coinbase listing sell-off many cryptocurrencies saw in recent months remains uncertain. For now, oracles and DeFi-related blockchain projects appear to be seeing an increase in demand.