Caterpillar (CAT) shares have been riding a strong uptrend since the stock touched its year-to-date bottom on late March, after the February pandemic sell-off, although its performance is still red for the year, losing 8.8 per cent as the industrials sector continues to struggle to emerge from the disruptions caused by the virus outbreak.

Why is caterpillar stock going down?

CAT shares plunged since Thursday – a day before Caterpillar’s quarterly earnings call – and have continued their downward path until today after the company unveiled that its dealers cut their inventory by roughly $1.4bn during the quarter while the management team anticipates a yearly decline in inventories of $2bn for 2020, higher than the $1.5bn they initially forecasted.

This pessimistic outlook weighed on investor’s decision to sell and ultimately sent CAT shares down to its moving averages with the next few days being decisive for Caterpillar’s stock performance as investors will see if this was just a minor pullback or if a more sizable correction is on its way.

Shares of the Illinois-based industrial equipment manufacturer started 2020 on a positive note on the back of an upcoming trade deal between the US and China and prospects of mild but steady economic growth for the year.

However, pandemic fears ended up triggering a broad-market sell-off in late-February, which resulted in a 37 per cent loss for CAT investors in a period of 30 days. Yet, the stock managed to recover most of its lost territory, following the broad-market rally seen afterwards.

In the first few weeks after the bottom, CAT shares failed to surpass the 200 DMA as fears of longer-than-expected factory shutdowns and slashed capital expenditures from major corporations weighed on the stock’s performance, but, later on, it managed to jump above that tough resistance and has gravitated between the 50 DMA and the 200 DMA since then.

However, since the company unveiled its quarterly results, the stock has plunged once again, finding resistance at the 200 DMA. But this is happening right when the 50 DMA is crossing this long-term moving average line, which results in a golden cross – a bullish technical indicator.

It is now uncertain if this golden cross will lift the tide for CAT shares and this is a major factor to take into account in coming up with a Caterpillar stock price forecast at the moment, along with various others.

As we can see in the chart below, Caterpillar shares have been on an uptrend since the stock touched its March bottom, even though shares have plunged for four days in a row now. At this point there are various elements that increase the difficulty of drafting a Caterpillar stock prediction and, therefore, probabilities have to weigh in on the decision of whether to go long or short on the stock.

The elements favoring a long position include the fact that Caterpillar managed to surpass analysts’ expectations in both earnings and revenues for the last quarter, which could end up resulting in upward price target revisions that will boost the price of the shares in the short term.

Moreover, another variable that favors this bullish CAT stock analysis is the golden cross that took place today between the 50 DMA and the 200 DMA, which could serve as the backbone of another short-term jump in the price of CAT shares, which closed the day right above those two trend lines. 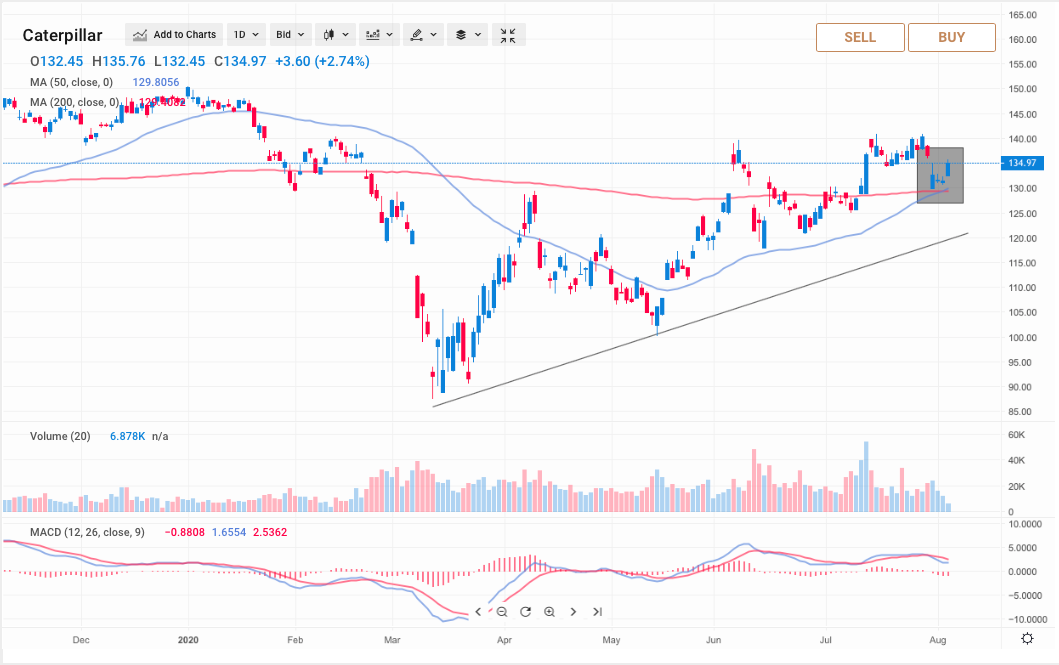 On the bearish side of things, the stock just succumbed to a rising wedge and could be headed for a sizable correction if it falls below that golden cross.

Additionally, there is the fact that the MACD is sending a sell signal and this shouldn’t go unnoticed, as if negative momentum continues to build up the stock could easily go below these moving averages. If we put everything on the table, we have two major bullish variables – potential upward price target revisions & golden cross – playing in favor of a rebound towards the $140 resistance level seen in the chart below, while we have two strong bearish signals – rising wedge break and MACD sell signal – pointing to further downward moves.

The next few sessions would be crucial to determine which way it is for these two Caterpillar share price forecasts. Of course, you will potentially miss some strong gains if you wait too long.

The most relevant Caterpillar shares news released recently are related to the company’s performance during the second quarter of 2020, with both revenues and earnings beating Wall Street’s estimates for the three-month period.

At the moment, 7 out of 26 analysts surveyed by Koyfin are pointing to Caterpillar as a strong buy, while another 4 rated it as a buy. Only two analysts are rating the stock a sell, but half of them are recommending investors to hold.

The average price target is $140, resulting in a 7 per cent potential upside compared to yesterday’s closing price.

This price target matches the resistance level the stock has failed to surpass four times already, which means that various upward price target revisions are probably needed to push the stock higher than that.

Meanwhile, analysts are debating if they should be bullish or neutral, but only a little crowd is favoring a bearish outlook.

With that in mind, traders who opt for taking a short position on the stock should know that they are following a contrarian approach, which is not always an easy road to take. Going against Wall Street consensus rarely pays off, especially in the absence of strong catalysts that favour a bearish move.

Do you want to become a part of the market and make your own bets on the CAT shares forecast? Join Capital.com where all major financial markets are at your fingertips.