Last week, all eyes were on Bitcoin: the leading cryptocurrency had just cracked past $10,500 for the first time since February and had entered a steep uptrend.  But over the past few days, BTC has stagnated. This lack of volatility has made some focus back on altcoins, hence why coins like Band and Zcash are surging higher.

A cryptocurrency trader expects for altcoins to continue to perform well as long as Bitcoin holds above this critical level.

Altcoins Could Outperform If BTC Holds This Level: Analyst

Bitcoin must hold $10,500 for altcoins to remain in a bullish state, said a trader in an analysis published August 5th. Seemingly referencing how that level indicates whether or not the cryptocurrency market is in a bullish phase, the trader wrote: 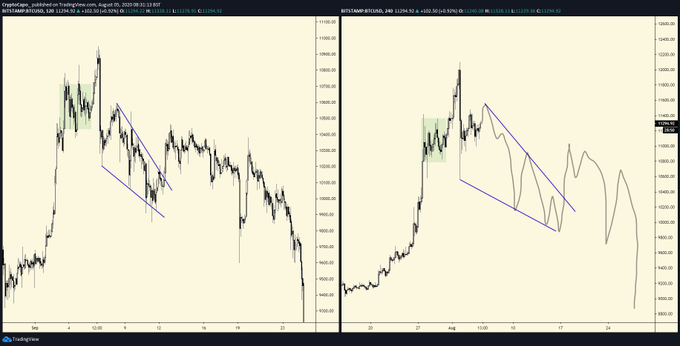 As to what altcoins are likely to perform well in such an environment, the trader mentioned EOS, Tezos, XRP, and Stellar Lumens. Those four cryptocurrencies have been outperformers on some days over the past few weeks and are all “large-cap” altcoins.

This sentiment is actually different compared to that of other analysts. Author of “An Altcoin Trader’s Handbook,” Nik Patel said in July that he wouldn’t be surprised to see altcoins underperform until Bitcoin hits $20,000:

“Wouldn’t surprise me to see dominance now rise until BTC all-time highs (pending a confirmed Weekly breakout above $10,600) > break $20k and alts find another bottom (like Nov/Dec 2016) > they rally concurrently like March-June 2017.”

Related Reading: Even Though Chainlink (LINK) Spiked to $9, Dave Portnoy Isn’t Buying It

Believers in the sentiment shared by the first analyst, though, should be pleased to hear that Bitcoin remains in a bullish state as per multiple analysts.

“The break above $10,000 is very compelling and should lead Bitcoin higher… It might be able to work off this condition with a sideways correction, but its upside potential is limited over the next week or two.”

This optimism was echoed by Bloomberg’s very own Mike McGlone, who released his latest crypto report on August 5th. In that report, he mentioned that the rally in the price of gold and macro factors indicate Bitcoin is likely to have an underlying bid moving forward.